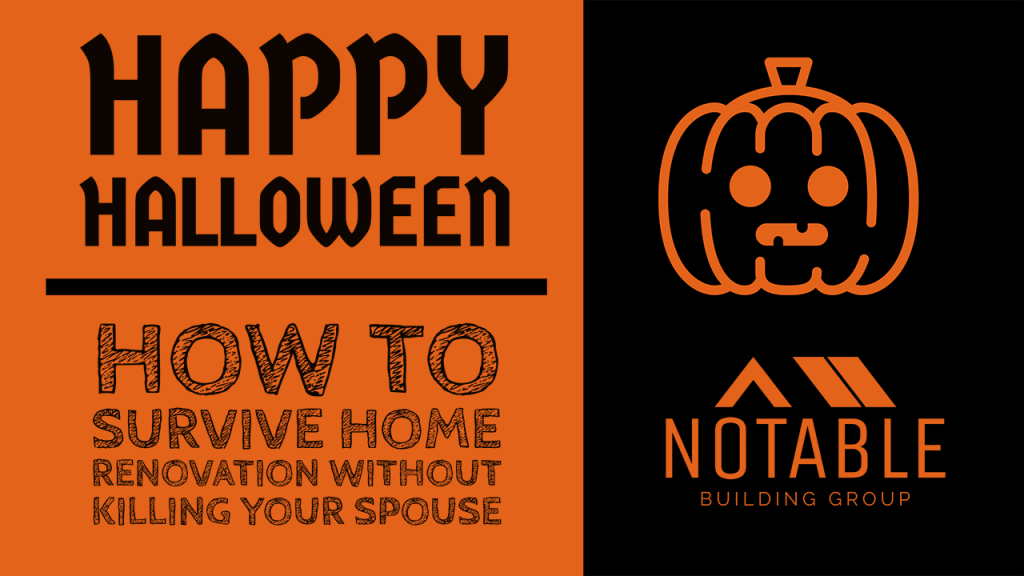 Happy Halloween: How To Survive Home Renovation Without Killing Your Spouse

Before we get started…

Be warned, the story below is a frightening tale straight from your renovation nightmares… The bickering, indecisiveness, disagreements, budget-blow ups; all things that could effect your next project. But home improvement projects don’t have to induce murderous rage! All of these problems can be avoided by simply hiring a trusted Calgary renovation company. Notable Building Group will always work transparently with their clients in Calgary, helping guide you through the difficult choices and hiccups that can plague your project, and lead to spousal “home”–a-cide… (Notable Building Group only supports violence against dysfunctional and outdated rooms in your home or business).

On the whole, my husband and I are pretty handy and, in the 17 years we’ve been married, we’ve taken on a variety of house projects with nary an issue. Well, mostly. We still don’t really talk about the Great Crown Molding Caper of 2006 because, it did not go well. The two of us are bona fide HGTV junkies and have to stop ourselves short of narrating to invisible cameras about our purchases when we troll the aisles of home improvement stores. We can spackle, we can paint, and we can use a laser level like Bob Villa.

But, when we decided to put an addition on our home, we decided it was best to leave it to the professionals (like a trusted Calgary renovation company…). Mostly because we hoped to still be married by the end of the project.

“only going to take six weeks”

When we told our friends we were adding on to our house, friends who’d survived home builds and similar renovations would eye us warily and raise their eyebrows. They’d quietly nod as we excitedly detailed our plans and they looked at each other knowingly when we said stupid things like, “It’s only going to take six weeks!” and “The contractor came in way under budget!” Just before we broke ground on our project, a friend who has survived a total gut job of an older house and a custom home build of a second house, looked me straight in the eye and said, “Good luck. Godspeed. Call me when you decide you are leaving your husband.” I nervously giggled because her statement unnerved me.  I mean, construction wasn’t going to be thatbad, was it?

It was worse. Way worse.

1. Look at your budget closely. And then add a bajillion dollars.

Construction ain’t cheap and even the most frugal bargain shoppers will find that hidden construction costs can be shocking. In addition to cost overages and additional labor expenses, it’s very easy to ring up the charges because home improvement stores and design centers make it very easy to want to upgrade. Recognize that your partner is going to be swayed by the very shiny six burner stove or that you will suddenly fall in love with a chandelier that belongs in a Rockefeller mansion. Decide beforehand on what areas you have wiggle room to splurge and be firm with each other. Doing so will make it easier to hear your partner say no when you are arguing over the hand scraped Brazilian hardwood floor that is way out of your price range.

2. Chip and Joanna can’t possibly be that happy.

The biggest shocker of our construction project was how much we argued and bickered over the tiniest of issues. We had no way of knowing that we’d both feel strongly about everything from light fixtures to paint choices to the gutter colors. If you are considering doing a major renovation to your home, have a conversation well before the project starts about the styles, choices, and visions you have for the finished project. Be clear and honest up front because when you have to make a quick choice when your partner isn’t around, it’ll save you from having an epic screaming match about roofing in front of your neighbors later on. Trust me.

3. Always give in because no one wins at drywall.

I don’t know what it was about having construction ongoing in my yard but something made me feel like I wanted to “win” at making the design choices. If my husband said beige, I said eggshell. If he said oil rubbed bronze, I said polished nickel. And, you know what? None of it mattered. Seriously, the finished project would have been beautiful either way, and frankly, it’s not worth digging your heels in over glass tile that has been hand glazed in Italy by the Pope. If your partner really wants to add a design choice, just give in and let them choose the color. You can always tell everyone for infinity that your husband chose that god-awful wallpaper.

My husband works outside of the house and, though I have the luxury of working from home, that luxury quickly turned into a nightmare as we endured months of construction. Constant interruptions, incessant noise, foul language emitting from the job site, and other interferences with daily life are the norm with construction. If you are the partner who gets to leave the madness, you should consider yourself lucky. You should also show up daily with flowers for your stay-at-home counterpart. The SAHP bears the brunt of the construction hellishness and they get to win the “my day was so chaotic and now I have a headache and you had better have brought home takeout because I can’t even” war at the end of the day. Period. No exceptions.

Remember The Money Pit with Tom Hanks? It’s the one where he completely guts a mansion while Shelley Long screeches at him during various house catastrophes and they almost get a divorce. Yeah, that movie isn’t too far off from reality, but not for the reasons that you think. Eventually, the dust settles, the workers go home, and you’ll no longer have a Porta-Potty in your yard. And you really do have that moment when the arguments over garage door stain colors, crown molding, and outlets melt away as you stand next to each other and marvel at what you were able to accomplish together. Just like the part where Tom and Shelley admire their gorgeous staircase and decide to get married, you will remember that you don’t hate you partner because of his obsession with smart home technology and his poor eye for color.

Construction is definitely stressful and can tax even the happiest of marriages, but thankfully, it’s not a way of life. The key is to let those arguments stay in the past and move forward in enjoying your new space.

Unless he picked the ugly wallpaper. You can argue about that forever.